A team from the Polytechnic University of Valencia (UPV) has developed an alternative to reinforced concrete beams used in the construction sector. Using additive manufacturing, they designed recycled plastic beams. This results in a drastic reduction in weight, since they weigh 80% less than current solutions, which considerably facilitates their transport and reduces the energy required for their assembly. The various 3D printed components forming the beam can be assembled as easily as LEGO bricks.

Very popular in the construction sector, reinforced concrete is, as its name suggests, composed of concrete and metal, most often steel. It is therefore a composite material that is resistant to traction and compression and capable of withstanding heavy loads. However, it is a material that remains heavy to transport because the presence of steel considerably increases the weight of the beam. Researchers therefore tried to reduce this constraint as much as possible and worked for 3 years on a 3D printing project. José Ramón Albiol, professor at the Technical School of Building Engineering (ETSIE) of the UPV, adds: “Our objective was to offer an alternative to the current reinforced concrete beams. These are made using extrusions built to the length of the room, which requires expensive installation and is difficult to transport..” 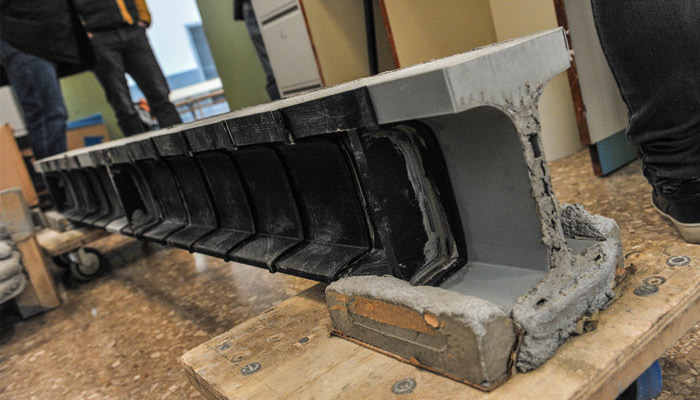 The researchers remain rather discreet about the 3D printing process used; we only know that they preferred recycled plastic to reduce the ecological footprint, and that they were inspired by the shape of the bone to design their 3D models. The objective was to reproduce the structure of the epiphysis, the terminal part of the bones: it is made up of several layers which give it significant rigidity while remaining quite light. Using additive manufacturing, the researchers were able to mimic this honeycomb structure and put material where it was needed.

The result is a reduction in overall weight thanks to the use of plastic instead of steel, but also thanks to a better distribution of the material. José Ramón Albiol continues:It is a honeycomb structure, which reduces the amount of plastic used – and therefore its weight – while maintaining structural rigidity.. This is what we have transferred to these revolutionary beams, more precisely to their profiles. It is a very intelligent natural system and its reproduction in these beams gives them, together with the low structural weight, very high mechanical capacities.

In concrete terms, the researchers 3D printed blocks that could fit together like LEGO bricks. A layer of concrete is then added to form the final beam. Beyond the reduced weight, this method makes it possible to have a modular structure according to the needs and the construction project. The blocks are more easily transportable, the installation being done on site, simplifying the associated labor. 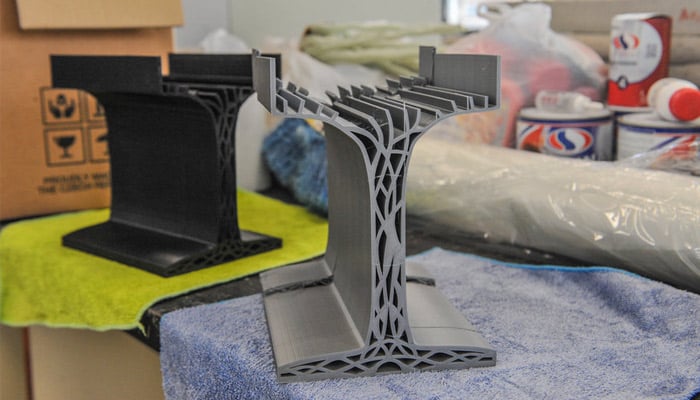 The truss structure reduces the overall weight of the beam

Miguel Sánchez, from the Department of Systems and Informatics of the UPV (DISCA), concludes: “Being able to customize the beams in situ makes it possible to adapt the characteristics of each of them to the structural needs at each point of construction. The possibility of recycling the polymer materials to produce the beams considerably reduces their carbon footprint.”

What do you think of these 3D printed beams? Let us know in a comment below or on our Facebook, Twitter and LinkedIn pages! Subscribe to our free weekly Newsletter herethe latest 3D printing news straight to your inbox!